A community hub for Edmontonians

For the past eight years, Urban Systems’ Landscape Architecture, Engineering, and Survey teams have been working with the Edmonton Federation of Community Leagues (EFCL) on a capstone project to celebrate their 100th anniversary. The EFCL is a not-for-profit organization that has been in operation since 1921 as a governing body for all community leagues in Edmonton, bringing neighbours together, providing recreation and social programs, developing amenities, and more. 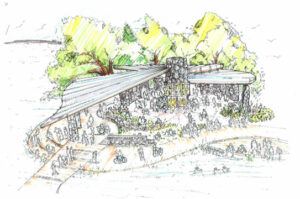 For the project, the EFCL chose a site within Edmonton’s Hawrelak Park to build a new feature plaza and interpretive trail. The park is the largest in Edmonton, spanning 68 hectares with a 5-hectare lake. It hosts several major festivals and events throughout the year and serves as a community hub for Edmontonians. It was chosen to host the new plaza as the park is a central site for all EFCL communities, has a high profile within the City, and hosts thousands of visitors each year. Additionally, in consultation with city administrators, this particular site was identified as an under-utilized area that needed an element of vibrancy and could benefit from restoration.

The EFCL felt that this site was an opportunity to contribute to the amenity value of the park and positively influence their growing legacy in the broader community. “We want to be an integral part of the community fabric and this was a great opportunity to work alongside a client to create something that represents their identity through the vehicle of built form. It aligns with our values, and spirit in service was the backbone of the project” shared Gregg Kahan, a senior Landscape Architect from our Calgary office who worked on the project. ​

The project’s design intent consisted of two main components: (1) to create a vibrant and integrated public gathering space and (2) to use the various design components of the project to tell the story of the EFCL’s history and celebrate the many contributions that this 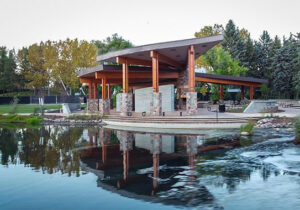 organization and its members have made to communities in the Edmonton area. The project website states that “The Community League Plaza is a tribute to the community league volunteers that have helped to build Edmonton for more than 100 years.”  Located on the southeast side of the lake, the covered plaza is a four-season amenity that features a large central gas fireplace, and incorporates new seating, lake and creek viewing areas, and interpretive displays that speak to the history and culture of the community league movement. A pathway network along the manmade stream offers new interactive art installations to engage visitors and continue to showcase the continuing contributions of the EFCL and their volunteers. Our integrated teams in both Calgary and Edmonton created the vision and designed almost every component of the project, including the architectural structure and associated central fireplace. The art installations were a collaborative design process with Calgary-based Heavy Industries, who also fabricated and installed the pieces.

Because the EFCL is a not-for-profit organization, the project relied on securing grants and fundraising.  This included contributions 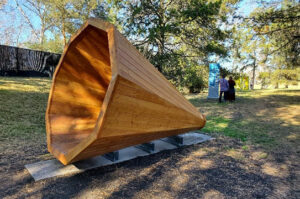 from the federal government, the Government of Alberta, the City of Edmonton, community building associations, corporate partners as well as all of the community leagues. The Edmonton area wasn’t the only community that came together to make this project happen. “This was a long hallways project” stated Gregg, “there was lots of travel and collective effort between the Calgary and Edmonton branches”. Over the course of the project, there were three different project managers on Urban’s end, and a consistent rotation of staff and volunteers from the EFCL. Gregg noted that Keith Fransson, of Urban’s Edmonton office, really stepped up to the plate to make sure this project was executed on the ground in a way that respected the vision and the goals of the client. It was very much a labour of love; “we had significant challenges along the way but were able to work though them with a collaborative mindset and the final product is something we are very proud of” explained Gregg. 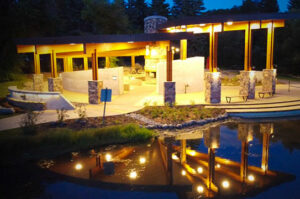 “When people see images of what we do, they tend to look only at the soft landscape components, but our work encompasses so much more. It is the holistic design of all of the hard and soft elements, both vertically and on the ground plane that collectively work together to create identity and a sense of place” shared Gregg. Landscape Architecture is about knitting together natural and man-made elements to create a vibrant and resilient environment—in this case, as a space for the Edmonton community to celebrate the last 100 years and continue to enjoy for the next 100. ​

If you want to learn more about this project, you can head to it’s website, or check out this ​CBC article​.